The festival of Holi is an important annual occasion in India. It marks the beginning of spring after a long winter. Holi is an inherently communal celebration and is enjoyed with colors, foods, and merriment. Here is a look at how Indians will celebrate Holi this year amid the restrictions. 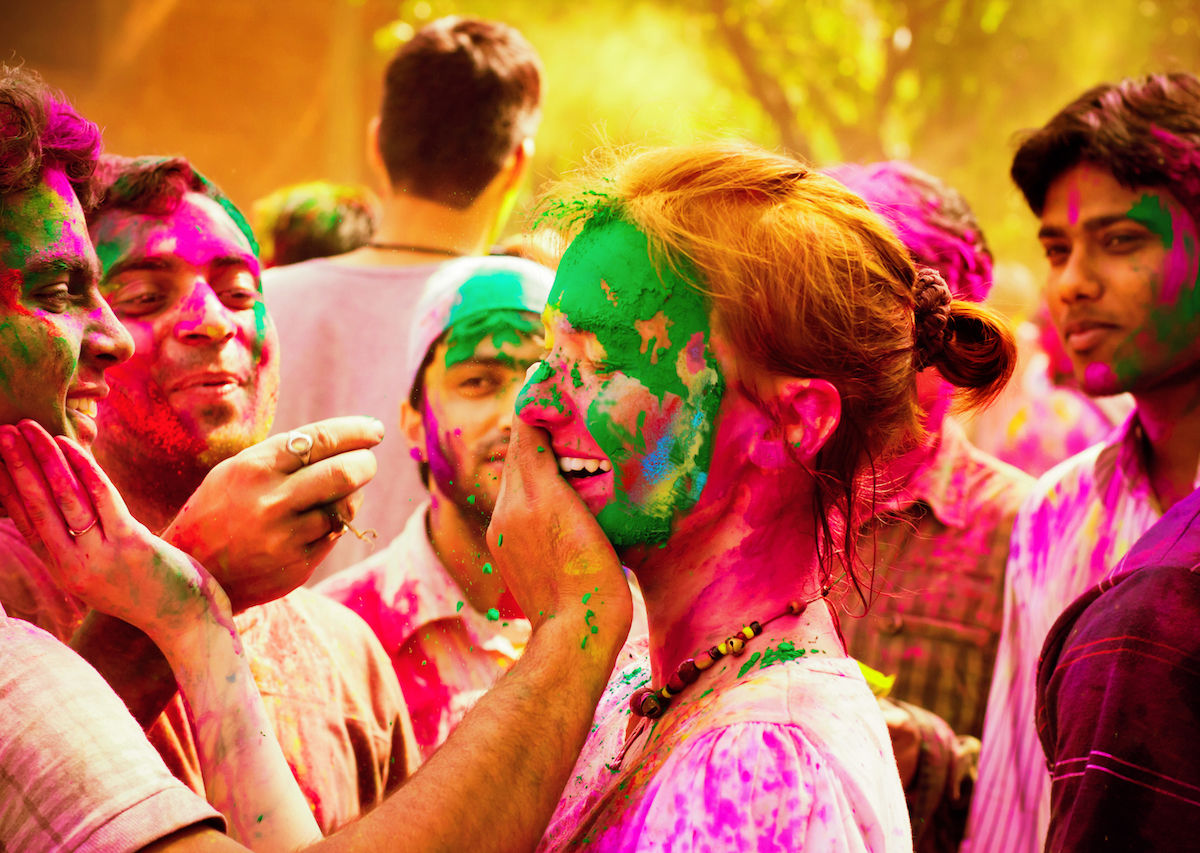 Article Summary show
Origins
More legends
How Indians celebrate Holi
Amid restrictions
Holi celebrations in the US
About the author:

The festival has origins in legend. Stories are told of an evil king Hiranyakashyap who became a power-drunk and demanded that all his subjects worship him. This evil king had a son named Prahlada. He refused to worship his father because he was devoted to Lord Vishnu. Hiranyakashyap tried to have his son killed on many occasions and failed. He then decided to enlist the help of his evil sister Holika. She had powers that made her immune to fire. In an attempt to kill Prahlada, she tricked him into sitting with her on a pyre. Because her plan was evil, Prahlada was protected from the fire, and Holika got cremated instead. The festival of Holi is named after Holika. It symbolizes the triumph of good over evil.

Indians color each other on Holi with a multitude of powdered pigments. This practice has origins in a story of Lord Krishna, who prominently figures in Hindu mythology. As a baby, Krishna drank poisoned milk, and his skin turned blue. Later, as an adolescent, Krishna fell in love with a fair maiden called Radha. His skin tone was very different from hers, which was something he did not like. To fix this, Krishna’s mom suggested that he color Radha. When Krishna poured color on Radha, they became a true couple. The tradition of applying colors to each other has endured ever since.

Holi corresponds to the Hindu Lunar calendar month of Phalguna. Most years, it falls sometime in March. This year Holi will be celebrated on March 28-29. The first day of the rituals begins with Holika Dahan on the night of the full moon. The events begin with the lighting of a bonfire to signify the burning of evil spirits. People dance and sing around the fire late into the night. It marks the death of Holika and the victory of good over evil. On the second day, people dress in white and step out of their houses with small bags of colors to apply to others. Each of the colors has an underlying meaning. Red symbolizes love and fertility; green stands for new beginnings; yellow is the auspicious color of powdered turmeric, a plant native to India and used as an herbal remedy; blue represents the Hindu God Krishna.

Balloons filled with colored water are dispatched from rooftops and balconies. People rejoice on the streets to the sound of drums. Small street processions move along, dancing and singing as they go from place to place. A traditional drink known as thandai is served. It contains an intoxicating edible preparation of cannabis. Of the traditional sweets served on Holi, the most prominent is gujiya, a deep-fried sweet dumpling. After the colorful celebration, people return to their homes and wash up, and then they go on a social calling spree to see friends and relatives.

The mandatory COVID-19 restrictions and social distancing put quite the damper on Holi in 2020. Without gatherings and communal spirit, Holi is not the same. 2021 is expected to be much the same as last year. Although India’s vaccine drive has started, it is far from complete. India has recorded 10.8 million cases of infection so far.

Holi celebrations in the US

More than 2 million Indians live and work in the US. They send money online to their families back in India as remittances. With large migrant Indian populations, Holi is celebrated in many US cities. New York, New Jersey, and Utah are some of the prominent ones. Societies and religious organizations formed by US Indians celebrate this joyous festival and reconnect to their cultural roots. Holi meets and parades are organized in cities like Utah and Spanish Fork. People get together and have fun in the midst of bright colors, much as they do in India.

Given the COVID-19 situation, 2020 Holi celebrations in the US were canceled. People were asked to stay indoors and avoid gatherings. Since then, COVID-19 cases in the US increased to 26.5 million. Restrictions will apply this year as well. The best way for Indians abroad to celebrate Holi 2021 is at home. Avoid going out. Indulge in some gujiya and other traditional goodies. Connect with loved ones on video chat.

Hemant G is a contributing writer at Sparkwebs LLC, a Digital and Content Marketing Agency. When he’s not writing, he loves to travel, scuba dive, and watch documentaries.